The soundbar can be a great choice for those who don’t want to occupy a room with bulky speakers. Fortunately, most of eminent companies that produce audio equipment give an opportunity to buy the best soundbar under 300 dollars. Let’s distinguish a few main features that differ a budget soundbar from a luxury one:

Before buying a soundbar, you will obviously need to analyze its main features, pros and cons, also taking into consideration your financial abilities. Luckily, it is quite possible to buy a budget one. That’s why I have selected top 5 of the best soundbars under 300 dollars price range, so you could choose your perfect one.

The Yamaha YAS-207 is a low-powered sound panel. The total power of the soundbar is 200W, taking into account the supplied subwoofer, which power accounts for 100W. However, a high quality sound is provided by a two-way system: the sound is divided into the high-frequency, and four low-frequency speakers with 46 mm in diameter. Despite the emitters number, the panel itself weighs little — about 6.0 lbs. The weight of a subwoofer says about its high quality, reaching 17.4 lbs.

The woofer connects to the soundbar wirelessly, and via Bluetooth you can synchronize it with other devices — MP3 players, smartphones, and tablets. In terms of a wired connection, the sound panel also doesn’t cause any complaints — there are the HDMI connectors (input and output), as well as the optical and line inputs.

Perhaps, the YAMAHA YAS-207 can potentially be the best soundbar under 300 dollars for those who want to install a sound panel in a small room. Is it directly aimed at users who don't have space for full audio systems. 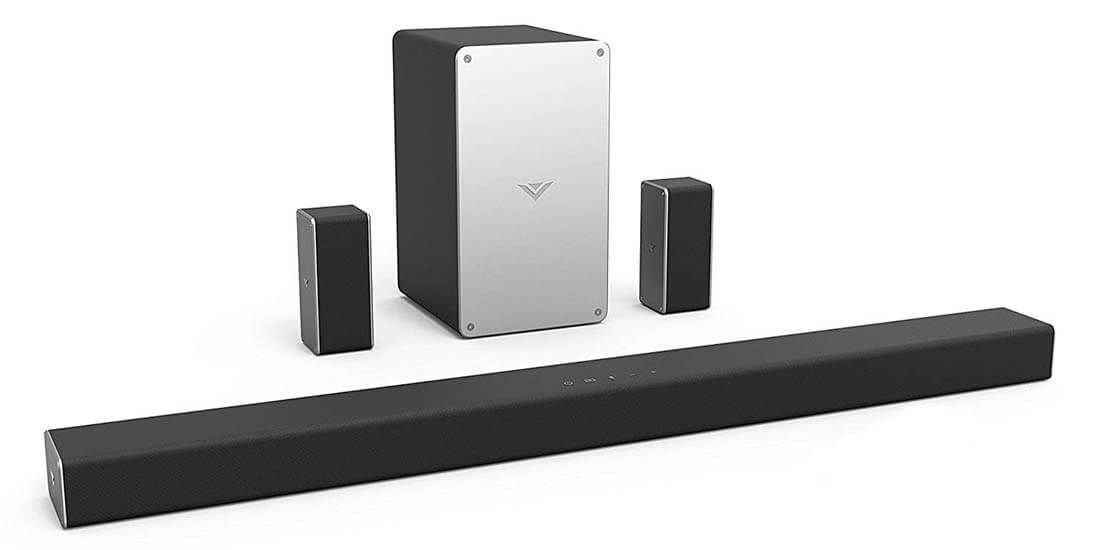 The SB3651-F6 from VIZIO is a three-channel soundbar. The wireless subwoofer adds enough bass to sound performance. This bar is among the top soundbars under 300 dollars that are able to provide the most surround sound reproduction due to two speakers that are located on the rear panel. The built-in DTS Virtual system offers the overhead sound, plus it creates that feeling, as if the sound comes from the ceiling.

The panel is supplied with a Wi-Fi connection. The integrated Chromecast allows playing audio content directly through the soundbar via network. This audio system is able to amplify voices on the soundtrack, while the sound reaches up to 101 dB.

Perhaps, the VIZIO SB3651-F6 soundbar can be a great budget choice for cinema and music fans that put volumetric sound on the first place when choosing an audio system.

The Solo 5 from Bose has a built-in amplifier and a two-way playback scheme. A compact system weighing 3.8 lbs provides maximum sound power of 100W per channel. The body is made of a cheap but solid plastic. The design of the bar is as concise as possible, the sound emitters are hidden under a protective grill, and the switching connectors are located on the back side.

The power supply interface and the USB port are located next to the audio jacks. The front panel speakers are designed to form an energetic frontal wave of sound with a volumetric scene. A modern playback scheme and a high-quality amplifier provide rich output sound with a decent power of 100W. It also should be mentioned that the model copes well with playing audio content from TV and mobile sources.

The Bose Solo 5 is a small-sized soundbar under $300 with a strict exterior design, that is really capable to replace more universal speakers in terms of quality and sound power. In addition, the dialogue mode provides more comfortable TV viewing, with built-in Bluetooth for wireless music playback from your smartphone.

The ZVOX SB380 is a sound panel with three wide-band two-inch speakers. Its main features are a built-in 4-inch active subwoofer and the proprietary AccuVoice technology, which enhances the intelligibility of dialogs. The soundbar is suitable for TV sets with the 37 to 65 inches diagonal. The minimalist slim cabinet is made from aluminum, with a metal grill on the front panel. The soundbar has the typical for ZVOX 3.1-channel system with a trio of two-inch drivers, and a four-inch subwoofer.

Remarkable that the soundbar has the Zvox's Intellivoice function for the hearing impaired, as well as a bass limiting option.

The ZVOX SB380 is a simple and compact sound panel, that doesn’t require any external devices. However, this audio system isn’t able to compete with the soundbars in the same price range that offer various types of a wireless connection, but it can be a great plain soundbar for those who doesn’t really need any additional modern functions.

This sound panel is directly designed for providing deep bass, and has three speakers. You will not have to run wires from the front of the room to the back, because the subwoofer is paired wirelessly to the soundbar. The soundbar also goes with two separate power cords for sub and sound panel. The soundbar goes with the unusually high-grade remote control for its budget price. Also, you can use Vizio SmartCast app instead, that has an impressively large variety of functions: from different types of volume tuning, to the audio balance altering.

The VIZIO SB3651-E6 gives a lot for its price. For someone, it may even be too much. However, it is a decent entry-level audio system for those who really appreciate the high-tech features.