On the market, there is a huge number of TVs, but even the coolest models have one drawback – their sound leaves much to be desired. The fact is that a thin form factor does not allow equipping them with a good acoustic system. That’s exactly when soundbars kick into action. In this post, I am going to test different models that claim to be the best soundbar under 200 dollars.

The soundbars of the suggested price range can be located in front of a TV or can be hung on the wall under it as they are quite compact. They are not as powerful as more expensive ones with the total output power around 120 W. The depth and power of the sound depend on the bass. Since the task of the soundbar is to be a compact device, it is impossible to install large low-frequency subwoofers in it. Nevertheless, many manufacturers choose to equip their devices with built-in subwoofers, which describes the products of the suggested price range in most of the cases. If you are trying to save as much space as possible in your apartment and do not want to shake walls with low frequencies, choose the unit with built-in subs. On the contrary, pick a soundbar with active subwoofer, which will be significantly more convincing than the built-in one.

So, we are ready to proceed with the review of the top 5 soundbars under 200 dollars.

Its flat sitting is low enough to be placed in front of your TV. Choosing the best soundbar under 200 dollars consider this one because after turning on the voice enhancement, the voices stop being muddied and you receive a clear sound. At the same time, the Clear Voice option improves the quality of talking scenes which are usually quieter than sound effects, so you don’t need to adjust the volume whenever background music is playing. The TV recognizes the soundbar and relays the sound into it from its internal speakers. You can use your TV remote control to adjust the volume of the soundbar. 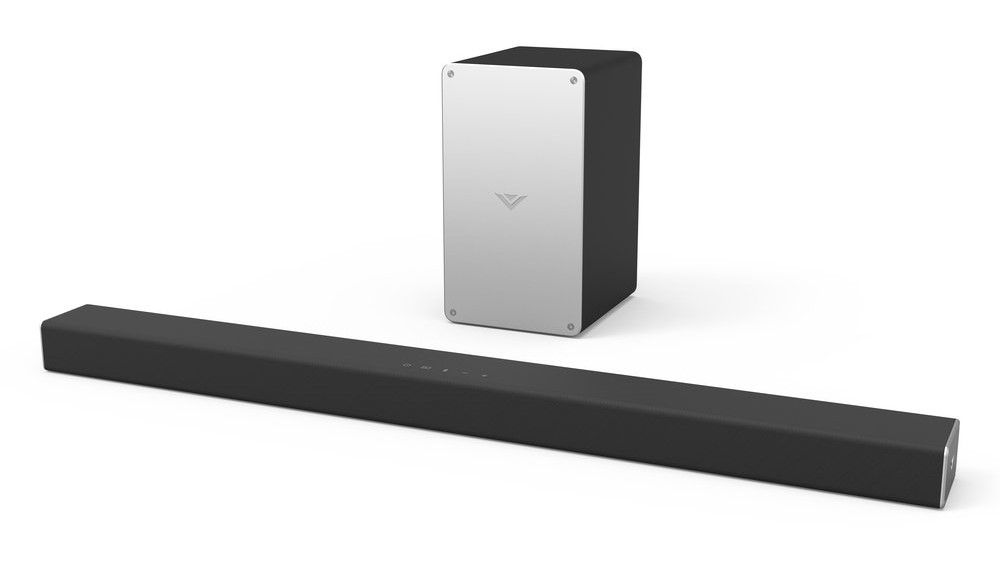 This soundbar deservedly competes to get the status of the best soundbar under $200 having a number of good features. However, it has its own disadvantages which mainly consist of inconvenient design choices regarding the remote and audio input. The setup is a breeze. All you have to do is to plug an optical cable between a soundbar and your TV, and here you go. To make this unit work properly, firstly you have to go into your TV settings, turn off the internal speakers and then turn on the external speakers in order to avoid echoing.

If you expect improved sound from this unit while watching a movie or listening to music, just switching between “music” and “movie” option would be enough. For more advanced users, there is a range of effects like TruSurround HD, TruVolume, subwoofer/treble/bass levels which you can adjust to your personal liking.

As soon as the Trusound option is enabled, it normalizes the volume so that you don’t need to accommodate the volume by constantly turning it up and down and you are not going to hear commercials louder than the program itself you are watching. The sound is rich and clear and during the dialogues, and at the sound effects moments. This model can be called one of the best soundbars under 200 bucks as it has a feature to adjust almost every detail like the surround speakers, the central speaker, the subwoofer, treble, and bass. Moreover, it’s possible to turn off the surround speakers. You can feel interesting effects using the eco mode which lets the system play for some time after the TV is turned off.

This soundbar enters the list of top soundbars under 200 dollars having all the necessary features you can rely on in order to get better sound. There are some acoustical adjustments for providing clear sound for you. One of them is Clear Voice which minimizes sound distortion, and bass adjustment according to your taste. Be sure to check a safety setting in the menu as it turns off the unit automatically after 8-hour work. What’s more, the developers have created a free mobile app which is recommended in the manual. With the help of it, you can set up your unit with some additional functions which are very convenient and useful.

This unit’s compact speakers aren’t designed for extremely loud reproduction. However, consider this unit while choosing the best soundbar with subwoofer under 200 dollars as it goes with an external wireless unit which you can place wherever you want to expand the sound without a tangle of wires. Moreover, it can receive the signal even if it’s placed in the next room. It can be connected via Bluetooth and goes with the Dolby Digital cable box. Thanks to the compact size, this soundbar will fit any living room and lie unnoticeable under your TV.