Dolby Atmos is the first audio system for cinema, which is not based on channels, but on audio objects. According to experts, a new milestone in the cinema will be the multi-channel Dolby Atmos sound.

The Dolby Atmos soundbar review is a good way to find out that this system makes sound more realistic, thanks to the fact that it expands not only in the horizontal plane, but also from above. Because of this, it is possible to create a three-dimensional sound picture, as it sounds in real life. So, you will have a feeling of complete immersion in what’s happening. In general, the Dolby Atmos sound system is different from a conventional home theater that transmits sound per channel, because it is more versatile and flexible.

In this article, we will highlight six of the best Dolby Atmos soundbars in a variety of price segments. Pay attention to their features, advantages, and disadvantages, if you want to turn your home into a real cinema theater using Dolby Atmos power.

The Sony HT-X9000F is one of the most affordable soundbars with Dolby Atmos that goes along with a wireless subwoofer. The sound panel was designed to fit minimalist interiors. The bevels on its edges are made in such a way that the sound panel is suitable for placement on a shelf or pedestal near the TV. There is a wireless connection available if you don’t want to spoil the general appearance with wires.

There are five audio modes. Each mode has its own button that needs to be chosen depending on the content: movies, music, games, news, sport.

There is a possibility for transferring audio and viewing information from a TV by hooking up the bar with a help of an HDMI-ARC cable. You can also listen to music by connecting the sound panel via the USB input or using the Bluetooth.

The Sony HT-X9000F also supports Wi-Fi, so after updating the firmware, it is possible to use the multi-user audio stream, the built-in Chromecast and Google Assistant. Using the voice command, the speaker system plays music in the desired room or throughout your home.

Samsung Electronics has released their premium class HW-N950 soundbar, that is among the most costly and high-quality soundbars with Dolby Atmos. The unit is remarkable for its robust assembly and goes in a matte metal finish. This is the most high-priced soundbar in our article, designed for connoisseurs of the highest quality sound.

The Samsung HW-N950 is supplied with 17 speakers, the two additional ones completely immerse the listener in sound, creating the most realistic sound stage. Also, the bar has the non-wired speakers on the rear panel, and a woofer for the multidimensional 7.1.4 sound format. Thanks to a broadband tweeter, the cinematic sound evenly distributes throughout the room.

The provided remote control is simple and minimalist. You can also hook up the speaker system to a home wireless network and control it through the SmartThings application on your phone.

The soundbar has three connectivity options: two HDMI, and one HDMI with ARC. There is also a possibility of an optical digital connection, as well as Wi-Fi and Bluetooth.

The HW-N950 is a costly Samsung flagship — its value is estimated at $1700 price range. However, many less eminent companies offer more options for this price. 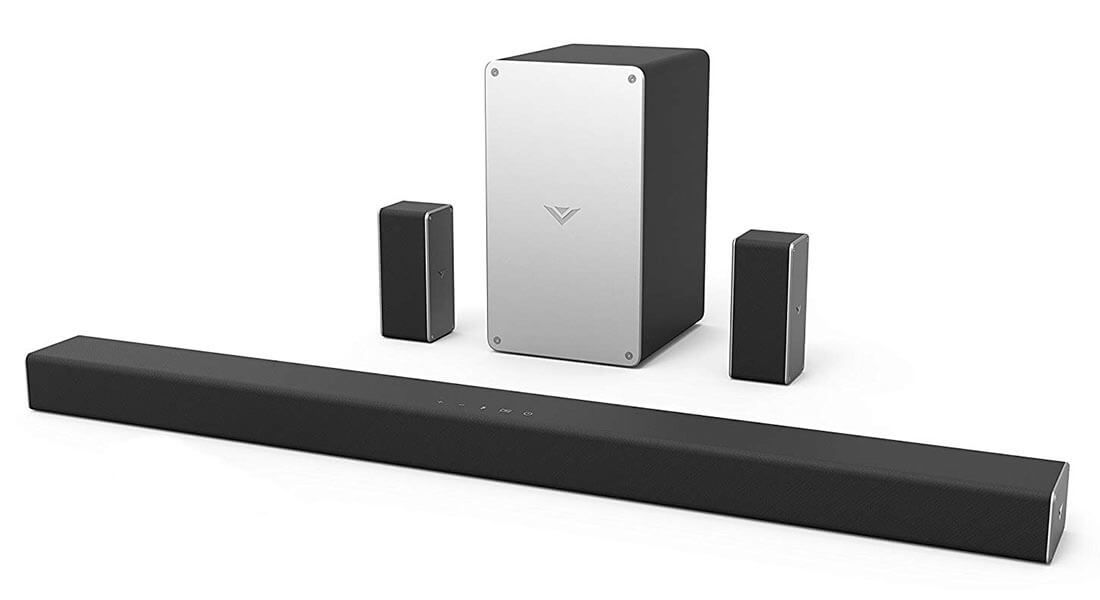 The VIZIO SB36512-F6 is a sound system with the most affordable price in our rating: $350 is the lowest possible price segment for a solid soundbar with the Dolby Atmos function. The sound panel comes along with two satellite speakers and one subwoofer. The satellites, however, are too small to impress with their sound. The six-inch subwoofer is able to create a loud sound, although it only takes about two feet and weighs 10 pounds. The sub also needs to be plugged into an electrical outlet.

The 36-inch sound panel is definitely compact. Its dimensions are 36.00 x 2.5 x 3.19 inches, which can potentially make it the best Dolby Atmos soundbar in the budget price segment for the biggest TV sets.

On the back of the soundbar, there are two HDMI outputs, an Optical port, USB and Ethernet ports. Several LED-indicators are situated on the front panel.

Regarding features, except the Dolby Atmos, the bar also supports the SmartCast technology. There is always built-in Bluetooth, which is more reliable, that is, however, a bit slower than live broadcast via the built-in Chromecast.

The Vizio SB36512-F6 features all the most necessary functions for the most affordable price. In general, this is definitely a decent replacement of your TV speakers if you are looking for the cheapest Dolby Atmos soundbar.

The Yamaha YSP-5600 is a Hi-End soundbar with a sound projector function. The sound panel itself is made in a minimalist style to fit any interior, all emitters are located behind the metal protective grid, and the case goes in a black finish. In the middle of the frontal grid is a simple display that shows the current volume level, and the DSP mode. On the left, there are LED indicators showing system status and connection.

This sound panel supports a wide range of functions, including Wi-Fi, Bluetooth, and the Yamaha MusicCast multi-room audio. Also, the bar is equipped with two woofers, which increase the total number of emitters in the speaker to 46. The total sound power of the YSP-5600 amplifiers is 128W.

The YSP-5600 is able to recreate the effect of a complete immersion in sound. And it’s pretty impressive how the soundbar copes with the reproduction of multi-channel audio in common formats.

The Z9F by Sony supports Dolby Atmos, as well as DTS: X. The model uses four channels (3.1), and, thanks to Sony's Vertical Surround Engine technology, the audio panel reproduces a powerful, volumetric sound. The dedicated “Vertical S” button mixes two-channel stereo content into 7.1.2-channel audio. The soundbar is reconcilable with 4K, HDR10 and Dolby Vision HDR, and therefore the end-to-end video transmission to TV will not lead to quality losses.

The Z9F is designed for a potential Sony SA-Z9R rear speakers tandem and equipped with Sony's proprietary Pro Front Surround technology, which updates 3D sound for greater immersion. Also, the bar supports the high-definition audio playback. The panel can be hooked up directly to Wi-Fi and is compatible with Google Assistant.

The Sony Z9F is potentially the best Dolby Atmos soundbar regarding to the offered specs: you'll get more, than you expect from a sound panel in the $800 price segment.

The HW-N850 includes one speaker bar and comes with a wireless subwoofer. With the 5.1.2 channel scheme, the system reproduces the most realistic and detailed sound. For its $1100 price range, you will get the sound panel with the minimalist design and construction. The size dimensions of the sound panel are 48.2 x 5.4 x 3.2 inches and the weight is perceptibly heavy (18.7 pounds) because of its 13 built-in drivers.

The available connections include two HDMI inputs and one ARC HDMI output. There is also an optical digital input, and a built-in Wi-Fi feature that can be easily configured using special Samsung app and Bluetooth.

The Samsung HW-N850 is a solid-quality sound panel that offers impressive all-round performance and generally offers many useful features. It is a mid-range sound system that, nevertheless, offers options that can only be available in premium-class speakers.