Those fans who want to stay close to their favorite vinyl collection and listen to singles from anywhere in the house/apartments without manual involvement need a Bluetooth-enabled record player. Let’s explore and choose the best Bluetooth turntable to get all bells and whistles for hassle-free listening.

All of those models provide automated wireless control. In other words, one can switch them on and off from a smartphone or any other Bluetooth-enabled devices. The connection with a corresponding record player is set up via radio waves. One more advantage is the opportunity to connect a turntable to a pair of speakers in another room or to headphones without using cables (not in all models). Besides, some models also come with a 3.5mm Aux-in port to play music from non-Bluetooth devices.

Keep in mind that even the best Bluetooth record player isn’t able to switch tracks wirelessly. So, one can listen to the tracks one by one but has to get to a turntable in order to skip or change them.

Now, it’s time to read the Bluetooth turntable reviews below to reveal the best models and examine their valuable features and specs for the wise choice.

This belt-driven model is noticeable for its Vinyl-to-MP3 Recording Technology that means the opportunity to transform vinyl records into digital audio for ultimate convenience. The unit also has a stereo speaker on the bottom side of the cabinet that offers clear sound regardless of the music genre. This speaker does its job with mids and highs but lacks bass; however, it is enough to enjoy music when the fast access to records is desired.

The record player boasts the last-century charm that is harmoniously combined with the advanced in-built techs. It’s a 3-speed device that supports 33/45/78 RPM to listen to both the latest and the old records. It has an RCA output to provide a connection with a home stereo system. Besides, it comes with a USB port to plug in a memory device and to record music from the vinyl in the mp3 format to a thumb drive, for example. The unit have the active 2-way crossover to further help isolate and define the output.

The turntable has a base from natural wood and an acrylic dust cover. Its cartridge and the stylus are removable and can be replaced when they start losing their playback capabilities.

This belt-driven turntable with Bluetooth catches the eye with its compact base. The unit is available in black, white, and navy colors and has a vintage look. It boasts a cast-metal base, a felt mat on the top, and a plastic dust cover. There is no possibility to upgrade the tonearm and cartridge but the stylus is removable.

It starts playing automatically and has auto-return as well. There is also a button to lift and lower the stylus and a small arm to switch between 10 and 7-inch records. It has a 3.5mm stereo output to plug the turntable into a separate phono stage or a dedicated phono input in a receiver. It’s better to set the tracking force less than 3.8 g, otherwise it can lead to the record degradation if listening to it again and again.

The turntable maintains a solid Bluetooth connection once established. It allows connection to the headphones, speakers, amp, etc. The records sound very musical, clear, and they’re well-articulated. The instruments sound coherent but not disconnected. 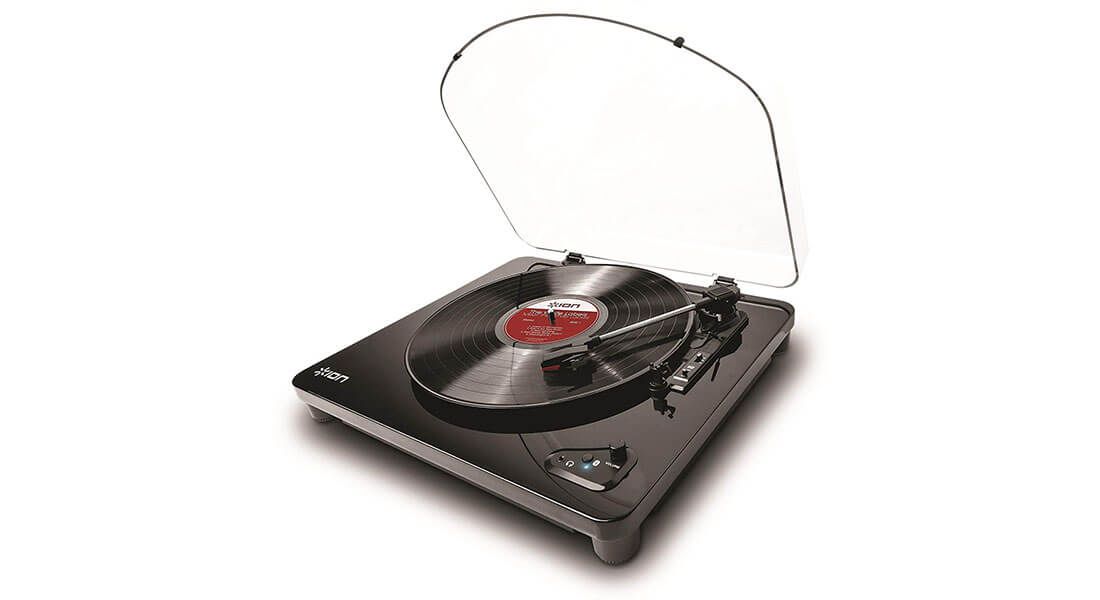 This model stands out from some of its rivals by demonstrating plenty of inputs and outputs to be hooked up to an acoustic system. A headphone output on the top of the base comes with volume control for adjusting the playback while the records are being digitized.

The unit’s Bluetooth provides connectivity with a portable speaker and Bluetooth headphones. The 1/8-inch aux input allows connecting any device that isn’t Bluetooth-enabled. It should be noted that a turntable wired into a sound system sounds richer, but Bluetooth sound is still clear and uninterrupted.

The record player has EZ Vinyl Converter software that makes the conversion process a breeze and doesn’t demand any human participation. It is just needed to point where to save the converted files – on Mac or Windows comp/laptop. However, there is no opportunity for editing that requires to start each next recording fast to avoid pauses as they cannot be edited further. 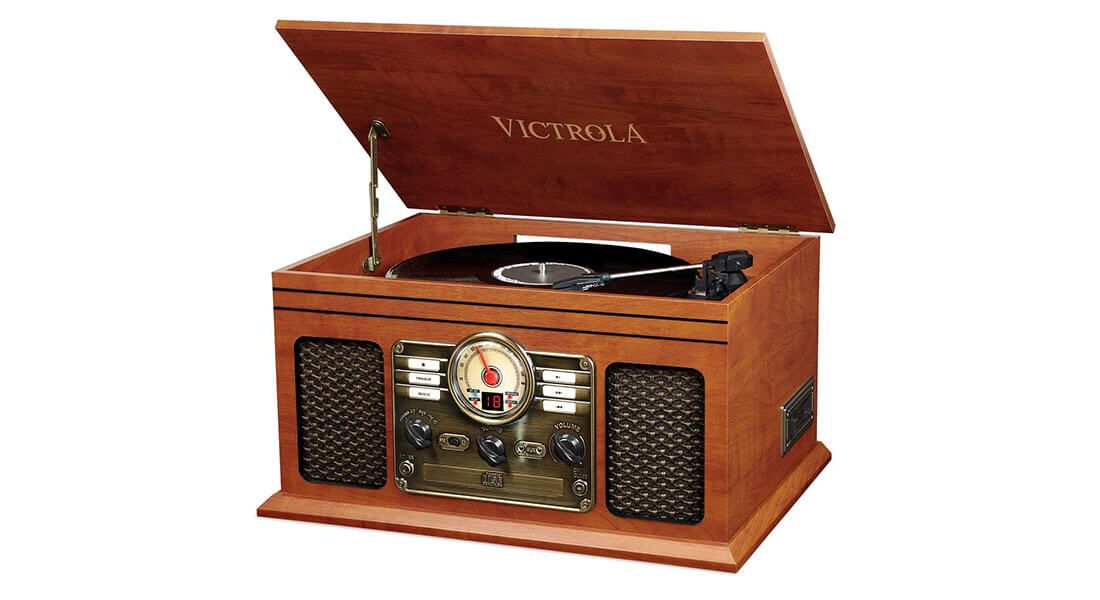 If you look for the best Bluetooth turntable, don’t miss the one that deserves this title. The Victrola Nostalgic boasts vintage design and modern technologies. It’s a full-functional entertainment center can play radio and CDs, cassette tapes and records, as well as stream digital content from a Bluetooth device. Standard cables are also included to let stream music from the units without Bluetooth.

This record player is a 3-speed (33 1/3, 45, and 78 RPM) belt-driven model that is great for playing both modern and shellac records that have different sizes – 7, 10, and 12 inches. Such versatility comes in useful for the owners of huge vinyl collections that cover decades. The unit has in-built dynamic full range stereo speakers but it is also possible to hook up the external speakers.

It’s one more center from the “dinosaur” of the vinyl industry that supports LPs, CDs, Bluetooth, and has an audio input. Bluetooth streams music wirelessly from across the room with a maximum distance of 33 ft. Connection with other Bluetooth-enabled equipment is also possible, as well as wired connection through a 3.5mm aux-in jack with non-Bluetooth devices. An analog-tuned AM/FM radio onboard allows listening to sports, talk shows, etc.

The V50-200 is a belt-driven device, but it is completely manual. So, the listener should place or cue the needle into the groove, cue and return the tonearm when the record is over by himself/herself.

The turntable can play records at the speed of 33 1/3, 45, and 78 RPM, but it lacks the adapter for 45 RPM in the box. It’s loud enough for a room, and the speakers have decent sound but lack of bass requires a pair of external speakers.

The model is available in 4 colors – black, red, blue, and teal. It is very compact and has a 50's inspired faceplate. On its front panel, there’re 2 stereo speakers, a volume controller for FM, and some other options. 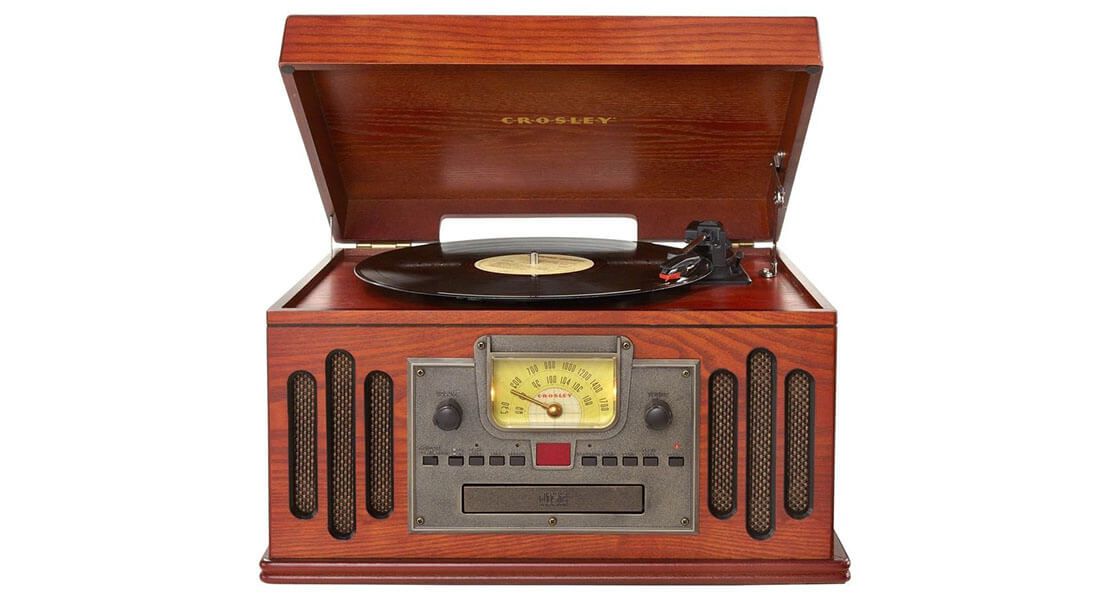 This belt-driven record player is remarkable for its stylized tuning dial that has a unique look. The unit allows playing cassettes and CDs. It comes with the in-built speaker that produces clear and loud sound. Its auxiliary input provides a great variety of wired connections, including MP3 players. The unit also has 3 speeds to play both new and old records. It comes with an adapter to play 45 RPM records, and it has an adjustable speed.

The AM/FM radio is on board, but the reception is not always perfect. An antenna wire hangs down the back of the machine to move it around in search of the right spot. The CD player tray is located on the front surface and has a large red track number display that looks out of place.

The turntable does not have sufficient wattage to reproduce powerful sound, but its total power is enough for small spaces. In general, the record player produces soft, clear, and musical sound, but creating a surround soundstage can hardly be expected from the budget device.