Having an opportunity to compare two budget offerings from Samsung — Samsung UN65RU7100FXZA vs Samsung UN55RU8000FXZA, I was surprised by the fact that they are supplied with a truly powerful 4K UHD processor. It really optimizes both TV’s performances with premium 4K picture quality.

The screen size difference appears to be the most significant thing when likening Samsung UN55RU8000FXZA vs Samsung UN65RU7100FXZA picture. With 65 inches of screen size, the UN65RU7100FXZA provides more convenient viewing experience in comparison with the UN55RU8000FXZA screen, which is 10 inches smaller. This distinction becomes very noticeable when watching sports programs.

The TVs use different technologies to display the most life-like colors, but in practice, I didn’t notice any differences in this aspect: they both reproduce millions of color shades, and in result, you get a picture with quite realistic colors.

Both TVs assure a large variety of streaming services, among the most popular ones, you can also get access to Vudu and YouTube.

The Samsung UN65RU7100FXZA is more multifunctional in terms of connectivity possibilities versus the UN55RU8000FXZA which doesn’t have component and composite video inputs, unlike its competitor. In general, these models will give you the possibility of both wired and wireless connections, as they have HDMI, USB, VGA inputs, optical digital audio outputs, Ethernet, also both Bluetooth and Wi-Fi.

The models also have such features like parental control and the possibility of Bluetooth audio streaming. 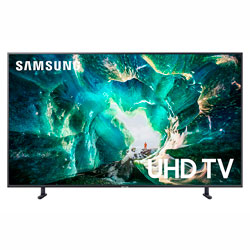 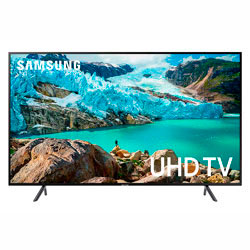