Both Pioneer VSX-1131 and Sony STRDN1080 are on top of the popularity, but Sony is more famous and credible company. It was interesting for me to test these “audio giants” and match versus each other.

Throughout the compare process, I noticed, that after being run for a few hours, the Sony has started to produce cracking sounds. The reason was in a thermal protection which was trying to cool the system down. The Pioneer doesn’t have such a feature and I chose to install the additional cooler, something like a computer case fan. I was surprised when saw that Sony STRDN1080 doesn’t reproduce sound in Apple lossless format, unlike Pioneer VSX-1131.

When I decided to make a comparison of Pioneer VSX-1131 vs Sony STRDN1080, I saw that the Pioneer offers the user 7 HDMI inputs, 6 of which were hidden on the front back of a receiver. The Sony can boast of only 6 inputs. Added in the Sony second Wi-Fi antenna for Airplay, DLNA, and Chromecast allowed connecting without problems, but with the Pioneer there were some problems cause the AirPlay sometimes was closing down. I didn’t like in the VSX-1131 the absence of connecting with the help of hard wiring.

Both receivers look presentable. Their large displays with bright inscriptions, buttons, and control dials work seamlessly. After comparing Sony STRDN1080 vs Pioneer VSX-1131 sizes, I can say that the first one is larger (19 x 15 x 8.4 inches) and the second one is smaller (12.6 x 17.1 x 6.6 inches). I paid attention to the fact that the information on Sony’s display was shown clearer than on Pioneer’s. 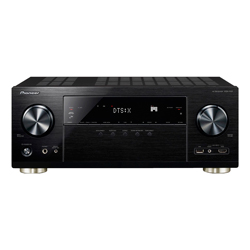 A Pioneer VSX-1131 draws the attention of many true audiophiles due to the object-oriented audio codecs. The device also supports a 3D video and can propose a high-level sound for creating home-theat...