The Yamaha AVENTAGE RX-A3080 vs Pioneer SC-LX901 comparison shows the great difference in their specs and, for example, amplifiers. The first model has higher total output power – 1350W, and the second one is lower – only 850W. The number of channels also greatly differs: the Pioneer can boast with 11 channels and the Yamaha with 9.

Both devices have Wi-Fi and Bluetooth, but the SC-LX901 shows much better signal continuity. The RX-A3080 doesn’t allow leaving the house; otherwise, it will be impossible to control the receiver via smartphone. Pioneer presents to the user the three-zone capability, while Yamaha can’t spread the sound to different rooms. The great surprise for me is a difference in sound. Yamaha doesn’t have an ASR technology and the Pioneer is supplemented by the mentioned feature that makes the music and each sound very deep and clear.

It isn’t hard to compare Pioneer SC-LX901 vs Yamaha AVENTAGE RX-A3080 because the first device has 4 AV inputs and the second one – 9. Such a difference can greatly influence the everyday usage process. For me, 4 AV inputs are not enough, especially when I want to connect the computer, camera, camcorder, smartphone, and DVD to the receiver. Both units propose an easy setting process via an on-screen menu.

Comparison of the visual appearance Yamaha AVENTAGE RX-A3080 versus Pioneer SC-LX901 shows me that the first model looks very standard (the upper part is glossy and the lower part is matte) with a special protecting panel that not only hides inputs and outputs but also ads classical severity. The Pioneer has a less bright transition from glossy to matte and almost the same panel. It is supplemented by additional side holes that help cool the device down (the first one unit doesn’t have such design method). 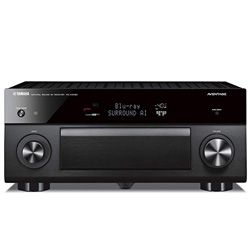 This Yamaha AVENTAGE RX-A3080 review deals with the premium device that can deliver 150W per channel. The anti-resonance tech makes the device completely reliable and durable. The sound is natural an...

A Pioneer is regarded as one of the most famous audio brands. Every new product is accompanied with a great attention and skepticism, so it was interesting for me to test such a creation, as an SC-LX...