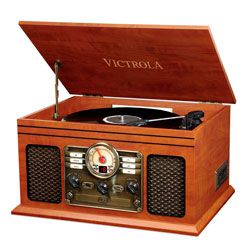 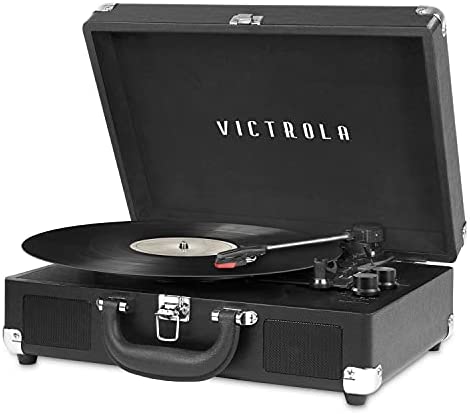 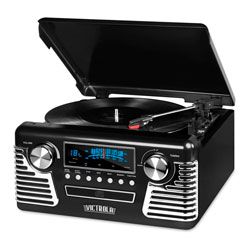 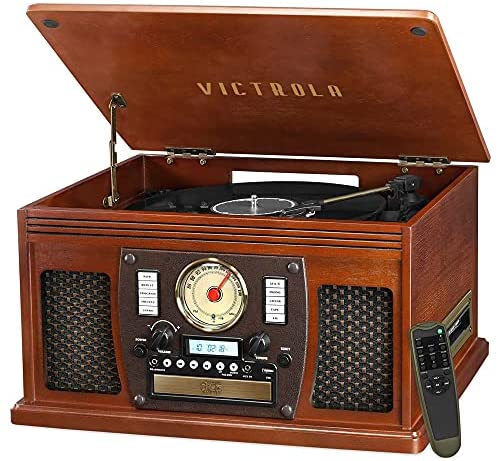 Crosley and Victrola are two American brands that have been existing on the audio market since the beginning of the 20th century. They have earned their popularity mainly thanks to their portable turntables that come in suitcase-type enclosures with carrying handles and instills a sense of nostalgia due to the design from 50th – 80th. Such models usually come in a wide range of styles, patterns, and colors, so everyone can choose the most suitable model.

Both Crosley and Victrola record players combine the familiar analog sound with the convenience of modern technologies. For example, most of their models use such features as Bluetooth, USB connectivity, give the possibility to play digital music, etc.

Considering the fact that both of these brands are targeted at those customers that search for a budget solution, this Crosley vs Victrola battle makes a lot of sense.

Let’s clarify the main features that are inherent in all modern LP players from both manufacturers:

Victorla turntables always come equipped with sound isolating feet, so you don’t have to worry about vibrations. They also include such basic controls as input selector, volume control knob, speed control, and start/stop button. All of them are based on AC motors that are considered as being more powerful than DC motors since they generate higher torque. The average lifespan of Victrola turntable needle is 500 hours.

There is a wide range of turntables from Victrola that can act like real music centers since they not only play vinyl records but are also equipped with FM radio, CD, and cassette players. Such models also include a full set of onboard controls, just like modern digital players, and come with a remote control.

Crosley also makes multifunctional models with modern features, but its record players aren’t so versatile as those from Victrola. The brand offers a rather sparse range of models that combine the functionality of turntable, radio, and CD/cassette player, though all of them come with built-in speakers. However, speaking of the radio-enabled turntables, it must be mentioned that while Victrola offers models with FM radio, Crosley LP players come with both AM and FM radio. Such turntables from Crosley also include a unique feature, called “programmable 20-track memory”. This means that you can play tracks on your CD in any order you want.

In terms of basic onboard controls, Crosley turntables incorporate input selector, volume, pitch, and speed control. The needles from Crosley are better than those from Victrola turntables since they last two times longer (approximately 1000 hours).

Some models from Crosley use AC motors, but most of them are equipped with DC motors. They aren’t so powerful but are more energy-efficient than the AC motors.

To be objective, let’s compare two universal, feature-packed models from the brands. The Victrola Innovative Technology VTA-600B-MAH is a 3-speed turntable with built-in speakers, USB encoding, CD/cassette player, and FM radio that comes with a remote control. The Crosley CR704B-GY includes 3 speeds, speakers, CD/cassette player, and radio. Though it comes with both AM and FM radio functionality, it doesn’t include a remote control, USB encoding, and has a poorer set of controls (there are no eject, program, and shuffle controls unlike in the Victrola turntable).

Considering all these factors, it’s fair to say that the Victrola Innovative Technology VTA-600B-MAH is a winner in the Victrola vs Crosley features competition as it offers more features in a similar model.

The preamp, built in Crosley turntables, also does a good job in providing warm and natural sounding. The players from this brand come with full-range stereo speakers that are somewhat better than those from Victrola, being able to provide fuller and more satisfying sound.

Nevertheless, neither Victrola nor Crosley is able to give a high-fidelity sound via built-in speakers. Hence, you will probably want to use a pair of better-quality external loudspeakers whatever manufacturer you are going to choose.

Testing Victrola vs Crosley record player overall sound reproduction on the example of the Victrola Innovative Technology VSC-550BT-BK and the Crosley Cruiser Deluxe CR8005D-WS, I’m inclined to think that the last model sounds better. Its sound appears to be cleaner even when using old LPs.

The turntables from both brands are belt-driven. Belt drive has less accurate playback speed and has a tendency to wear out more quickly than the direct drive. However, it doesn’t influence too much on the sound quality.

Both the Victrola Innovative Technology VSC-550BT-BK and the Crosley Cruiser Deluxe CR8005D-WS are belt-driven models, but since the Victrola model imparts less motor noise, I will consider it as the winner in this category.

Normally, Crosley and Victrola players are supplied with fully-automatic, S-shaped tonearms that are made of metal. Victrola most frequently uses aluminum and nickel-plated tonearms while Crosley almost always uses aluminum ones.

Despite the fact that the brands use very similar tonearms since the Victrola Innovative Technology VTA-200B MH tonearm is a little wobbly, it loses to the Crosley CR8005D-BK in the Crosley vs Victrola record player tonearm quality battle.

Both Crosley and Victrola turntables come equipped with ceramic cartridges that are known for being robust and resistant to damage. However, not all of them are of the same quality. For instance, the higher price of the Victrola Innovative Technology VTA-750B allows using a ceramic cartridge of better quality than the one implemented in the Crosley Cruiser Deluxe CR8005D-WS.

So, searching for a turntable with a more durable tonearm, pay attention to the Crosley Cruiser Deluxe CR8005D-WS.

Let’s look at the connectivity options presented in the turntables from both brands on the example of two similarly priced models. The Victrola Innovative Technology VTA-600B-MAH has a 3.5mm input jack for headphones, Bluetooth, RCA outputs, Aux-in, and USB. The Crosley CR704B-GY includes Aux-in, headphones jack, Bluetooth but can’t offer RCA and USB.

So, it’s easy to conclude that the Victrola Innovative Technology VTA-600B-MAH is a winner here.

Comparing Victrola record player vs Crosley prices barely makes sense since they both have an average selling price that ranges from $50 to $200. However, by a margin of around $10, Crosley can be considered as a more budget-oriented manufacturer.

Hence, having about the same features, the Crosley CR704B-GY still appears to be cheaper than the Victrola Innovative Technology VTA-600B-MAH.

Crosley and Victrola can play music in multiple formats since they combine a lot of modern features. The players from the brands are also very similar mechanically, i.e. they both are belt-driven, and come equipped with ceramic cartridges and metal tonearms. Thus, it’s extremely hard to answer the question of which one is better, Crosley vs Victrola. However, I think that Victrola turntables are slightly better than Crosley’s for those who value multifunctionality. 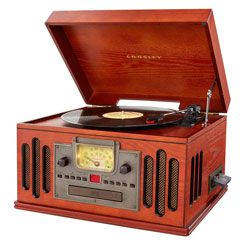 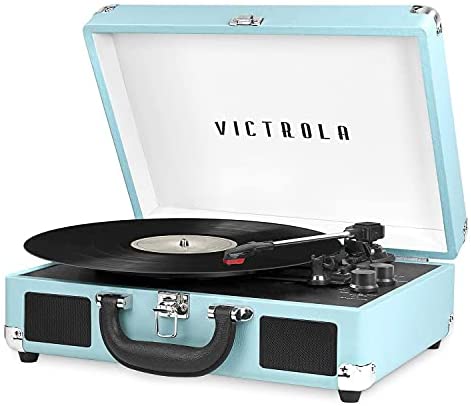