My aim main is to compare Sony STR-DN1060 vs Sony STR-DN1080, these two Sony models that feature the same number of channels, Internet connectivity, and price. Besides, both of them have 3D pass-through and are able to upscale signal up to 4K through via HDMI. Are there any differences between those entry-level units?

Both units work with FLAC files up to 24-bit/192kHz, 5.6MHz DSD via network and USB, and 24-bit/192kHz WAV files via HDMI to stream plenty of high-resolution content flawlessly. Their Bluetooth is compatible with wireless headphones and can stream music without any interruptions.

If looking at Sony STR-DN1080 vs Sony STR-DN1060 in the terms of functionality, the latter features sleep timer to be set to turn it off automatically at a specified time. Besides, it can be managed via a smartphone. The STR-DN1060 allows bi-amplifying the speakers for getting more open and airy sound.

The Sony STR-DN1080 supports the Dolby Atmos advanced surround sound technology for a multi-dimensional sound experience and the DTS:X format that does the same but doesn’t require height channels or a certain number of speakers. This unit has Phantom Surround Back on board to create the illusion of more physical speakers.

It makes no sense to contrast Sony STR-DN1060 vs STR-DN1080 regarding the design since both models were designed in a usual black box where the selection and volume knobs sit next to each other, as always, while other manufacturers prefer to place them on the opposite sides. The only difference is that the STR-DN1080 is lower and weighs less – 23 pounds versus STR-DN1060’s 25.8 pounds. 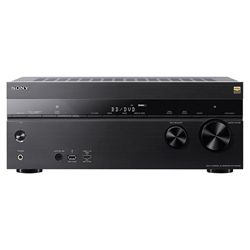