Redesigned remote, adding support for both aptX and NFC, one or two less HDMI inputs but adds a third HDMI output to support the second zone, and improved second zone support (any source not just analog). The receiver has a nice feature set (NFC, WiFi, Bluetooth w/Apt-x, colorful OSD) for the price. The 1050 was very easy to set up in a 5.1 mode with outdoor zone 2 speakers. The receiver with the main goal of setting a system to listen to FLAC audio files hosted on PC. The FLAC files are visible to any device on local the network through the popular DLNA standard. Bluetooth function works great and is easy to pair with cell phone/iPod.

For an existing 7.1 system, if you want to add Atmos height speakers, you either need to eliminate your surround back speakers or get a receiver capable of 9.1 or more.

If you need a powerful device that is able to play the DSD audio format, and you are not going to connect many devices that use the AV interface, then Sony STRDN1080 is right what you need. If you need something simpler - then STR-DN1050 will be right for you. I hope this receiver comparison will help you a lot. 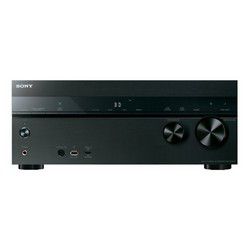 Audiophile, home theater-, and TV fans would definitely find the Sony STR-DN1050 a lucrative offer, even for its upper-middle price. The receiver produces wide, full and even sound, with high dynamic...