The test Sony STR-DN1040 vs STRDN1080 makes it possible to compare the devices of the same brand to reveal the peculiarities of two models that belong to the same series. Their price is the same too, as well as the number of channels and connectivity interfaces, but they have some differences in their power and types of built-in decoders.

The check of Sony STRDN1080 vs STR-DN1040 demonstrated the difference in its output power – 1155W versus 700W respectively. Besides, the later model 1080 has larger power per channel that allows setting multi-channel systems and getting the immersive powerful sound in a large room.

Sony STR-DN1040 provides rich dynamics and surround sound even at high volumes. Despite the sound is getting brighter while the volume is increasing, the bass remains agile and taut. STRDN1080 sounds fantastic too; it delivers the incredible amount of details and seems completely deep and natural. However, it’s getting too solid when the sound is cranked up.

Those AVs can stream 4K content and make high-quality upscaling. Both devices permit to arrange Zone 2 in other room or patio. They have the pure direct mode to escape interferences.

Sony STR-DN1040 has 2 fewer HDMI inputs but 7 more AV inputs than STRDN1080. STR-DN1040 can be managed via smartphone apps – TV Side View to handle general AVs options and Network Audio Remote for streaming. This AV has HD on-screen table that makes the text very clear (even if there is a lot of it there) to set up sources.

clear (even if there is a lot of it there) to set up sources. STRDN1080’s mic allows setting the sound levels of the speakers automatically. The AV supports Chromecast but only its audio (not video). Its “Phantom Surround” option creates extra surround channels without real speakers for 5.1.2. system in order to imitate 7.1.2 one.

Both units have built-in Wi-Fi and Bluetooth, so, you need no additional adapters. 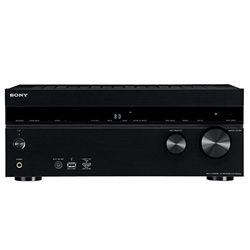