Sony STR-DH790 vs STRDN1080 comparison is explainable hard as both of them are superb in some things but not ideal in others.

The biggest difference between the two is their built-in decoders. Whilst Sony STR-DH790 offers both Dolby and DTS families in a whole range, STRDN1080 seems to be not that flexible in it. Sony STRDN1080 can offer only DTS:X and Dolby Atmos, however, if it doesn’t stop you from buying it then you can get quite a nice advantage of the ability to listen to music from your own devices or of the Net itself! Sony STRDN1080 compare to Sony STR-DH790 has WiFi and IEEE 802.3/IEEE 802.3u compatibility, so if you have forgotten where your USB stick with the music on is, just find the track or film on your computer and enjoy a clear sound.

There are also a few little moments that worth mentioning when compare Sony STRDN1080 vs STR-DH790. If power consumption is an important criterion for you, then choose STRDN1080 for sure. It uses only 240W while operating versus 700W of Sony STR-DH790. For the receiver it is super-low and you can feel safe with your electricity bills from now on! However, don’t be so happy about it. If you ever need to move Sony STRDN1080, be ready that it weighs about 23 pounds.

And the last thing – if you want to control your receiver via your phone, these receivers are not for you. None of them support smartphone remote control option, so I am afraid you have to put the remote controller on a memorable place every time. So, if it is an important criterion for you, maybe you want to read about other comparisons than Sony STR-DH790 vs Sony STRDN1080 on the website?

Setup of the unit was pretty easy with a couple of exceptions. First, the front speaker wire terminals on the back of the receiver are vertical, with one terminal above the other. This makes threading the speaker wire tougher than it needs to be. Another issue I had was that I selected the wrong speaker configuration for the audio easy setup and as a result received an error message. Backing up and selecting the correct speaker configuration solved the problem but the speaker config descriptions in the setup menu were a tad confusing.

This time Sony decided to focus just on two main parameters - sound quality and signal processing, so this model lacks some features like a sleep timer and bi-amplifier. However, output power per channel of 165W and ability to connect devices needed in different ways (wireless especially) makes it a really good choice. 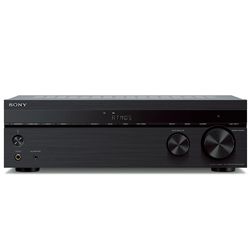 Personally, for me, the Sony STR-DH790 is regarded as one of the most noteworthy receivers. Why? Because Sony has always been a solid name in electronics. This receiver has enough power to make your ...