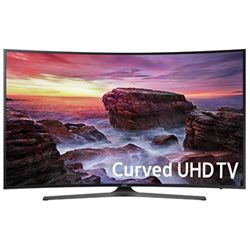 The Samsung UN55MU6500 review shows that the specified model supports HEVC 4K streaming that brings an improved image quality at considerably low bitrates (such a peculiarity is important for live streamers). The evocative unit belongs to the medium price niche devices that is a good indicator.

Pay attention that the Samsung UN55MU6500 TV is a MU6500 series product. Each representative of which (49, 55, and 65 inches) has a curved screen that adds immersion depth to the picture. They are equipped with UHD Picture Dimming technology, which automatically makes dark colors deeper and white colors brighter. The series’ models appeared in the 2017 year and all the TVs are complemented with the 4-core processor that performs the image processing.

The 55-inch TV can not only boast with the impressive Samsung UN55MU6500 specs but also with the accuracy of the colors on the screen, and the simple method of calibrating the image to get a decent picture. The Smart TV platform, created on the Tizen 3.0 operating system, works quickly and efficiently with the settings by default. Auto Motion Plus feature eliminates blurring but contributes to the appearance of somewhat unrealistic colors on the screen (it can be switched off or corrected in the settings menu). The TV comes with pre-installed popular apps such as Netflix, YouTube, and Amazon Video, which work seamlessly and without lag or frame drops. There are three HDMI inputs and two USB connectors, located on the rare part of the TV and can be easily accessed. The model is equipped with the ability to quickly connect smartphones and tablets via Wi-Fi.