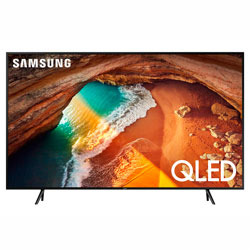 Samsung manufacturers have created Q60R series to offer their TVs with QLED technology for a more affordable price. The TVs from this series can be bought in one of many sizes (from 43 to 82 inches), while also being able to provide such features as Quantum Dot, Quantum HDR 4X³, and many others. The QN55Q60RAFXZA is a 55-inch model that was released to the market in 2019.

The QLED technology, implemented in this TV, is one of Samsung’s best color technologies that provides impressively realistic colors. Thanks to that, this TV delivers the image of more expensive models. However, being an edge-lit model, the TV loses a bit in terms of brightness and details.

Thus, in this Samsung QN55Q60RAFXZA review, I would like to pay special attention to an Intelligent mode that individually adapts the TV’s brightness to every scene. And not only just brightness but also the sound. This way, the sound will be quieter during the scenes that are too loud, and louder during the scenes that are too quiet. However, the built-in 20W stereo speakers are better than average but still not very impressive.

Among the other QN55Q60RAFXZA specs, it should be noted the Game Enhancer which makes this TV one of the most suitable ones for gaming thanks to Dynamic Black Equalizer which provides greater visibility in dark scenes.

Talking about the remote control, the QN55Q60RAFXZA is shipped with a simple one since it’s meant that you mostly will be using the voice control feature provided by Bixby voice assistant (the TV also supports both Alexa and Google Assistant). By the way, this remote also allows controlling all the compatible with the TV devices which I found very convenient.

Moving to the TV’s interface in this QN55Q60RAFXZA review. This model has a standard Smart Hub interface, with the icons located at the bottom. It’s customizable (you can delete the irrelevant icons), and supports the most popular apps including even Apple TV . It also features a Universal Guide which greatly simplifies the process of searching streaming content/live TV shows.

The TV stands on two detachable legs. Together with the stand, the TV weighs 43 pounds.