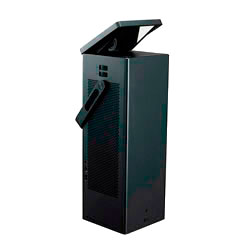 This high-end LG HU80KA 4K UHD projector is innovative and full of features including the native 4K UHD image quality, HDR support, wireless streaming, and so on.

The unit is versatile and can be installed upright on any surface. It has an unusual design, can provide a crisp colorful picture from different distances to the screen, and supports the share function with smartphones and tablets.

The HU80KA has an intuitive and simple setup and supports the LG smart platform. Its only disadvantage is the non-serviceable laser appliance, which, however, should serve five times more than regular DLP projectors with lamps.

The first thing to describe in the HU80KA review is its unique design. The long rectangular box with the vent grills and the handle doesn’t remind of anything projector-like. The lens is situated in the upper part of the box and can project the picture directly onto the screen or via the mirror reflection. The mirror is built-in, the lens cap can be removed.

On the side of the projector are the zoom and focus dials, and all connections are located on the bottom part. The carrying handle is adjustable and can serve as a prop for the projector installed on the tabletop.

The connections include two HDCP 2.2-compliant HDMI ports, one of which is ARC-enabled. There’s no VGA input, but the projector is fitted with the Ethernet port and wireless options. The projector sends the sound to the wireless speaker through Bluetooth or perform screen sharing via WiFi. The audio inputs and outputs enable connecting the soundbar, the speaker set, or the AV receiver.

The LG HU80KA review would be incomplete without mentioning the WebOs platform implementing the smart TV in this projector. The Smart TV and browser access are operated easily through the Magic Remote having the mouse function.

The image produced by LG CineBeam HU80KA remains contrasting and full of colors. and shades in both dark and lit environment. 8 million pixels of 4K resolution projected with the 2,500 lumens provide bright peaks and subtle color transition, with natural skin tones. The blacks are deep and the greys and whites are uniform. The color accuracy is high, while the yellows might be a bit oversaturated in the semi-lit environment.

The projector has the built-in stereo speakers with a decent sound, rated at 7W each. The set is enough for watching TV shows or conducting the presentation, but the music doesn’t sound impressive due to thin bass.

The device works quietly, with 30 dB of maximum volume, which is unnoticeable when watching the movie. The adjustment options include the throw regulation and zooming for 1.3X. The screen can reach as large as 150 inches in diagonal without affecting the picture quality.