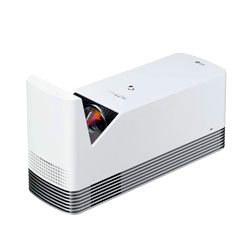 The projector incorporates a powerful lamp with considerable lifespan and average luminosity. This makes it a good option for dark room movie watching, gaming, or presentations.

The look of the LG HF85JA reminds of anything but the projector device. It’s a rectangular box with taller one side holding the mirror and the notch near it. The large lens is hidden in the notch, covered with the curved glass and facing the mirror.

The main body of the device is smooth, with the ribbed lower part. Above the front speaker, numerous ventilation holes serve for heat dissipation. The size of the box is 13.90 x 4.70 x 7.50 inches, and it weighs 6.6 lbs.

Controls are minimal, with the focus switch and the power button on the top panel. The latter also performs navigation functions. The back side features the HDMI, USB, digital audio, and Ethernet ports.

The remote has the oval ergonomic shape with the thickened lower part, ball-like navigation button, and convenient grouping of the buttons.

The HF85JA is based on the DLP technology and is equipped with the powerful laser lamp having the 1,500 lumens capacity and serving up to 20,000 hours in the Eco mode. The resolution of the display makes 1080p, with 2 million pixels. No 3D support. The color gamut contains over 1 billion hues, the contrast ratio makes 150,000:1. The TruMotion technology is used in the Gaming and Dynamic modes.

The device implements the ultra short throw technology, with a 120-inch display projected at 8 inches. The display is rectangular, with 16:9 orientation. The keystone can be regulated for all four corners, via manual correction. The zoom technology isn’t available.

Stereo internal speakers are 3W each. The noise produced by the projector varies from 26 dB to 30 dB. The input lag makes 58ms.

The picture produced by the LG HF85JA ultra short throw laser smart home theater projector is vivid and features high brightness uniformity on a flat screen. The contrast in a dark room is high in each of 6 settings available, with uniform blacks and consistent whites. The grays are fine, without the muddy effect. The color palette is wide enough with distinct peaks. Still, the presence of the ambient light deteriorates the image quickly making the blacks and colors look washed out and the contours go blurry.

The projector has the full functionality of LG TV, with Smart TV and browser, multiple options for audio connection. The built-in speakers are audible and interference-free in a small room but don’t suffice for the large ones. The lag is noticeable in the dynamic video games while being OK for presentations and PC monitor function.