The LG OLED65B8PUA vs Sony XBR65A8F comparison is the best way to see the difference between these 2 devices, which were presented in the 2018 year. The first one relates to the B8 series that has AI and the α7 intelligent processors. The second one is a part of the A8F series, which is equipped with the Amazon Alexa and HDR10 & HLG support. Sony belongs to the high-priced category, unlike LG.

Among all the available XBR65A8F’s picture modes, the Standard is the best. It adds contrast texture processing to make snowflakes and hair on people’s heads much more apparent. This mode shows the white more light blue. The LG OLED65B8PUA also has the same mode, but the picture differs: there is no such granularity and white looks bluer. The red is too bright and I have to change the settings to get the desired effect. TVs have different picture quality which I have to compare. While watching TVs in a dark room, LG demonstrates some light shades of persons and present a clear image, while the Sony displays the characters holistically, without shadows but somewhat blurry.

The sound quality is almost the same, but the XBR65A8F has a little bit louder speakers. The devices have the same number of HDMI (4) and USB (3) ports. The only distinction is a those plug’s quality. The connection to Sony happens in a few seconds. 3 of 4 LG’s HDMI plugs work well but the last one doesn’t react on a new device appearance. The difference is also seen in the YouTube absence on the XBR65A8F.

Sony’s remote controller has to be aimed perfectly at the white LED indicator; otherwise, the signal won’t reach the device. The OLED65B8PUA’s remote controller doesn’t have such a peculiarity and I can control the unit from any part of the room. The Sony XBR65A8F vs LG OLED65B8PUA appearance differs due to the TV thickness (2.24" versus 1.93"). The Sony’s back has a plastic panel that covers all the connections, while the LG’s plugs are mostly placed on the side part. 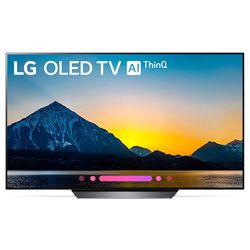 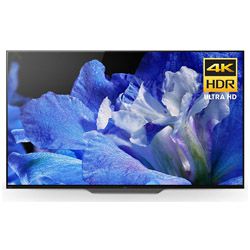