The choice of LG OLED55C8PUA vs LG OLED55E8PUA is mostly defined by the user’s preference. Both C8 and E8 series appeared in the year 2018 as high-class OLED TVs with a pack of useful functions and technologies. Powerful processor, plenty of Smart TV functions, high contrast, and native HDR make the common features of these TVs. The way to compare them is studying the build and design particulars, as well as audio options.

The image of LG OLED55E8PUA vs LG OLED55C8PUA is equally lifelike and bright, with accurate tone mapping and deep contrasts. The OLED technology provides for complete pixel control letting out the highly-dense blacks without grayish tints. The LG OLED55E8PUA is performed in the picture-on-glass technology ensuring yet more voluminous picture with the precise shading.

Both models implement the native 4K resolution featuring sharp detailing and the variety of HDR formats including Hybrid Log-Gamma. The contrasts and vividness do not deteriorate with the fast frame motion due to the native 120Hz response.

The smart features of LG OLED55E8PUA vs OLED55C8PUA are based on the same OS and offer a wide variety of video formats and codecs supported (but not MOV files). The TVs have decent integrated speakers, playing quite loud and with a good amount of detail. While the LG OLED55C8PUA emits the good-quality stereo sound at 40 W versus a more powerful surround speaker of the E8 model.

The TV sets are packed with a bunch of streaming apps and provide fast Wi-Fi (including 5 GHz option) and Bluetooth connection. The remote has the voice option for navigating the menu and controlling the performance, while the voice control apps (like Google Assistant) are built-in as well.

The E8 model is less in width while being taller and thicker than the C8 TV. The latter also features a fraction thinner frame letting it have more display area. It has the rounded stand design in comparison to the straight one of the LG OLED55E8PUA. The C8 TV also has a larger clearance of approximately 2 inches versus 0.5 inch of the E8 model. 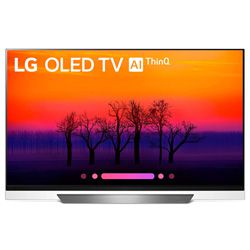 See price “High-end” is the right word for every feature about the OLED55E8PUA (E8 series) including its price. It delivers top-quality picture, implements smart control, and is one of th... 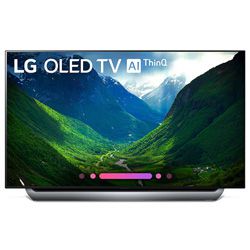 See price If you’re up to the vast, highly uniform blacks, solid whites, and premium overall contrast, the OLED55C8PUA is a TV to have a closer look at. The C8 series of LG OLED TV originates i...