The Hisense 65H9D vs Samsung 58NU7100 comparison seemed to me unusual, because the first brand wasn’t very famous, unlike the second one. Both units belong to the medium price niche. The Hisense TV is a representative of an H9 series, while the Samsung – NU7100. Screen sizes in series were very different, but Samsung presented on the market the greater diversity. Important: the 65H9D was introduced in the 2017 year and the 58NU7100 0 in the 2018 year.

It was easy to compare Samsung 58NU7100 vs Hisense 65H9D and their pictures. The South Korean company is well-known due to its high-level screens and bright images. The picture on 58NU7100 was very realistic; moreover, I quickly found the modes and adopted the visual effects. The 65H9D had more dimmed and vague image. Even additional settings did not demonstrate the desired result.

The Hisense had higher speaker’s power rate – 30W, while Samsung could boast with 20W. One more surprise was to me that fact that compared to Korean, the Chinese product had more HDMI and USB plugs. All of them worked perfectly. The Wi-Fi was present in each device, but Samsung had more steady work and quick cooperation with a specific app. I didn’t find the necessary mobile app for the Hisense.

Samsung had a strict black design with textured plastic and medium thickness. The Hisense was supplemented by the brushed silver plastic bezel. 2 legs became a practical and visual addition, but it seemed to me, that 58NU7100 had more strong feet with the special internal core. During the whole testing period, all the TVs became warm, but 65H9D had some temperature distribution and its increasing wasn’t so noticeable. The 58NU7100 get warm along the bottom edge of the panel where the LEDs were. The build quality was great in both models. 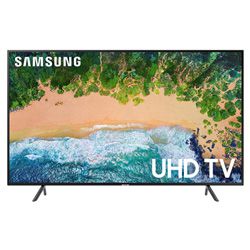 Starting off describing Samsung 58NU7100 specs from the design, I’d like to mention that on the outside it has a really dark gray, almost black metallic bezel running around the picture with a ... 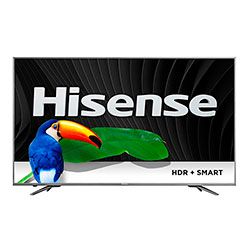