Sony STRDH590 can perfectly work with other Sony devices (if you turn on a Sony TV, the receiver turns on as well). The FM module allows you to have 30 presets. A smart Bluetooth module guarantees not only high-speed stable connection but also a possibility to connect other devices and stream your favorite tracks even if they have high bitrate. The automatic calibration system DCAC will analyze your room audio-wise and calibrate speakers to avoid any echo preserving the purity of sound. The remote controller of this receiver is not compatible with some models of Sony Blu-Ray players.

Sony STRDH770 has an initial calibration process which is automatic and precise enough even if your room has the odd shape. This unit produces enough power to fill even a large room with clear, distortion-free sound. You can also stream content from a Bluetooth device. It also supports NFC for wireless streaming. The DSD technology provides excellent sound. It also has a USB port on the front panel. The device can choose the source automatically if you use Sony’s HDR ARC. The process of setting up is easy. The calibration process is fast and easy as well (it takes less than a minute). The Bluetooth application may take some time to connect, so it may be faster to press the right button on a remote controller.

The first difference that you will notice when you compare Sony STRDH590 vs STRDH770 is the supported sound setup - STRDH590 is a 5.2 channel receiver, while STRDH770 is a 7.2 sound receiver. Another fact that is worth mentioning is the total power output – 725 W Sony STRDH770 vs STRDH590 that has 520 W. the difference is quite big.

The advantage of STRDH590 is that it is very easy to connect and use. The disadvantage is that it is not compatible with some devices from the same manufacturer (Sony).

The advantage of STRDH770 is its user-friendly interface, which makes the device easy to use. The disadvantage is the Bluetooth module that may take some time to connect.

Overall, both devices produce great sound and video output. Therefore, if you want something powerful and modern, with many enhancement technologies, then STRDH770 is for you, but if you look for something simpler then you should pay attention to STRDH590. 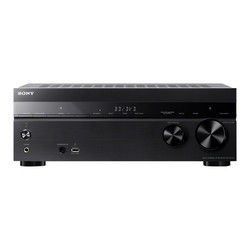 If you are searching for a budget 4K AV receiver to upgrade your home theater, take a closer look at Sony STR-DH770. It’s a 7.2-channel model that provides 145W per channel and is able to give ...