I got two powerful receivers and decided to make comparison Marantz SR5012 vs Sony STRDN1080. These receivers have powerful hardware and wireless support and I will try to explore all features, pros and cons of them.

The Sony STRDN1080 is a powerful home receiver that works in 7.1.2 mode with a power of 165 watts/channel. Sony delivers a "warm" sound. Dialogue sounds like original human voices. Low-end bass is deep and tighter. At high and mid frequencies the sound maintains sharpness.

I compare Marantz with Sony STRDN1080 and SR5012 has less power amplifier - 100 watts / channel, but the quality of the sound stays at the same level.

Both receivers have the support of modern video and audio processing technologies, such as Dolby Atmos, DTS: X. When working with video receivers, they cope with 4K video and have the function of increasing the resolution.

Many ports, both analog and digital are responsible for connecting of both receivers. Both receivers are equipped with a full set of wireless interfaces - a Bluetooth module and dual-band Wi-Fi. There is support for multi-room playback and playback from streaming services.

In my Sony STRDN1080 vs Marantz SR5012 review, I should notice that SR5012, unlike STRDN1080, is equipped with the Audyssey MultEQ XT, an automatic tuning system supplemented by Dynamic Volume and Dynamic EQ technologies. The firmware does a full setup of the receiver after the finish of connection with user`s audio system.

Like most receivers, STRDN1080 and SR5012 have a large black case with perforations for cooling components. Sony STRDN1080 has a front panel with a glossy insert under which is the display. Below the display is a number of buttons for customization. 2 controls are located on the right side of the panel. Unlike the STRDN1080, the Marantz SR5012 has a more concise front panel. In the center is a round display, below it is a row of minimalist setting buttons. On the sides of the panel, there are 2 symmetrical regulators. 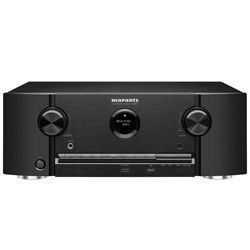 The amazing sound quality should be mentioned in this Marantz SR5012 review first. The device is rammed full of techs for making it crisp and immersive – Dolby Surround, Dolby Atmos, and DTS:X....