The receivers are quite similar, Sony STRDH590 vs Yamaha RX-V385 both have a 4k HDMI pass-through. But Yamaha can also boast of Video conversion and 3D pass-through, both are absent in the competitor model.

Both models have a digital AM/FM radio, Yamaha has 40 channels while Sony has only 30. The sound features are also different. Yamaha RX-V385 has got a 24 bit D/A converter, virtual CINEMA, 5.1 channel class, and 17 DSP preset quality. Versus Sony STRDH590 with a 32 bit D/A converter, and an S-Force PRO Front Surround effect.

Yamaha RX-V385 vs Sony STRDH590 both have a built-in clock with a sleep timer. They both play MP3, WAV, AAC, and WMA.

Both of the AV receivers have a Bluetooth option. And both do not have any Wi-Fi or IEEE.

Both AV receivers are smartly designed with a black display and white fluorescent lettering. The buttons are also black. Smaller inputs are located on the front panel, the designs are slightly asymmetrical yet minimalistic. 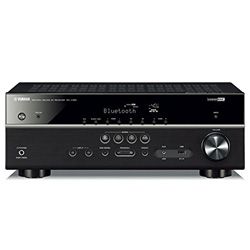 A total output power of a Yamaha RX-V385 is 380W, and output impedance per channel reaches the rate of 8 Ohms. These indicators allow the device to work for a long time freely and demonstrate a high ...