Denon AVRS540BT offers more inputs and more connection options together with more radio channels etc. While Sony STRDH590 boasts of better stereo and surrounding sound features. Sony STRDH590 vs Denon AVRS540BT are both good family friendly options that will be great for people with modest income.

Since both of these AV receivers are budget options neither of them has a dual zone capability. Denon boasts of Dolby Pro Logic II while Sony has S-Force Pro Front Surround. You can compare those two sound features as they both give good surrounding effects.

Both Sony STRDH590 vs Denon AVRS540BT come in a black matte metallic panels with black displays and fluorescent letters. Denon has complementary grey buttons while Sony has buttons of the same material and finish as the body itself. Denon has got smaller dimensions and weights two pounds less versus its Sony rival which makes it more convenient and easy to place in your TV stand shelf. 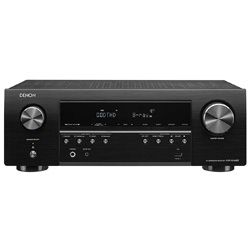 The new 5.2-channel model AVRS540BT which I managed to get on the review is based on the design of the best Denon receivers and combines high sound quality with progressive video features at a very c...